Even when the only sound you hear is silence, there are other ways you can serve others with a heart – an attitude exemplified by CPF staff Qi Jian. Read his story. 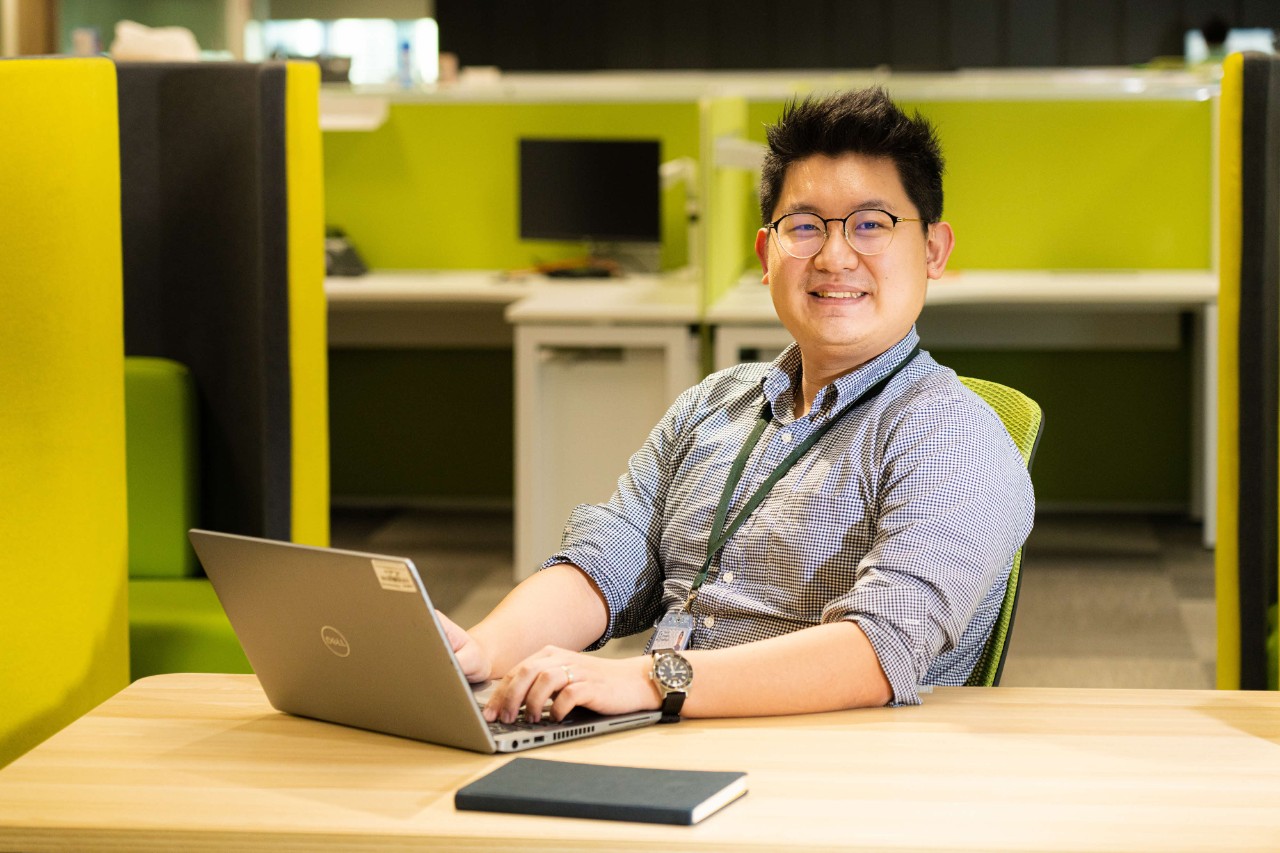 Life as they say, is not a bed of roses. Everyone will experience their share of struggles. But imagine throwing a disability into the mix. How would you then live your life?

While most of us go through the standard path to adulthood, comprising years of education before entering the workforce, 29-year-old Lee Qi Jian had to take a different route to get to where he is now – working in CPF Board (CPFB) as a System Engineer.

Qi Jian grew up with profound hearing loss in both his left and right ear. While he went to a special school when he turned seven, he believed that he could do what anyone else could despite being “different” and set his sights on entering a mainstream school.

He studied hard and obtained good grades which enabled him to enroll in a secondary school of his choice. However, it was also then that he really felt ‘different’ from his peers.

“It was the first time having ‘hearing’ friends, as I had mostly only made friends with school mates who were also deaf* in primary school. I did not feel confident as they (his school mates) might judge me for being different.”

Fortunately, he met many kind souls who looked out for him while he was in school. Because of this, Qi Jian is a firm believer in giving back to society. Creating awareness and empowering the deaf community is something he feels strongly about. He was part of the Regular Service Project for the deaf community in university and was a volunteer with TOUCH Silent Club until early 2022, where he promoted deaf awareness in public and organised events for the community.

Upon graduating with a degree in Electrical and Electronic Engineering with a specialisation in Computer Engineering, Qi Jian joined an insurance company that adopted cloud technologies for a one-year fresh graduate programme.

Despite his disability, Qi Jian adapted well to working life.  He believes that his university internship and past experience working part-time gave him confidence and prepared him in his transition from a student to a working adult.

After the completion of the graduate programme in 2020, Qi Jian started looking for suitable engineer jobs, particularly ones that would challenge him and hone his technical skills further. That was when CPF Board (CPFB) offered him a role as a System Engineer.

The role ticked many boxes. Qi Jian knew that CPFB had embarked on their digital transformation efforts, and he was excited about having the opportunity to be part of the project and hone his technical skills.

Qi Jian joined the CPFB in July 2020 as a System Engineer where he now oversees security solutions that monitor unauthorised accesses to databases and servers as well as audit data accesses.

Qi Jian’s job with CPF occasionally requires him to put in extra time for critical issues, outside of office hours. But as someone who enjoys challenges and solving problems, he feels that the role is rewarding as it also allows him to contribute to the wider community.

Recalling his most stressful moment, he shared that there was an incident where software patching took the entire night as multiple issues arose. Everyone in the team worked together tirelessly to monitor the patching through the night and the issues were resolved the next morning.

“It was so stressful that I even dreamt of it as I slept that night. But I am thankful that the team worked together to resolve the issue and because of that, it did not feel like I was alone in dealing with it.”

Moments like this further reinforced Qi Jian’s belief that his disability does not hamper his collaborations with his colleagues.  While it is challenging at times, he does not let such issues stop him from building and maintaining meaningful friendships with his colleagues while contributing as much as everyone else. Sometimes, it all starts from taking the first step.

While he wears a hearing aid on the left ear and has a cochlear implant on the right, Qi Jian mostly communicates with his colleagues through instant messaging. A challenge he faces at work is attending online meetings where attendees do not turn on their cameras.

“I tend to lip read when someone is speaking so it makes it harder to understand someone who does not have their camera turned on or have their mask on. I usually use my phone to convert voice-to-text, but it is not 100% accurate.”

This was exacerbated when the COVID-19 pandemic hit, and everyone had to wear masks. “There are colleagues who may not be aware of my hearing impairment and initiate calls with me online, but I understand I cannot expect them to know of my condition, so it is also my responsibility to share it with them. But when I do, they will adjust the way that we communicate so that it is conducive for everyone,” he added. Amongst the things his colleagues do is to instant message or send him an email to further explain the contents of the call.

A colleague that others can rely on 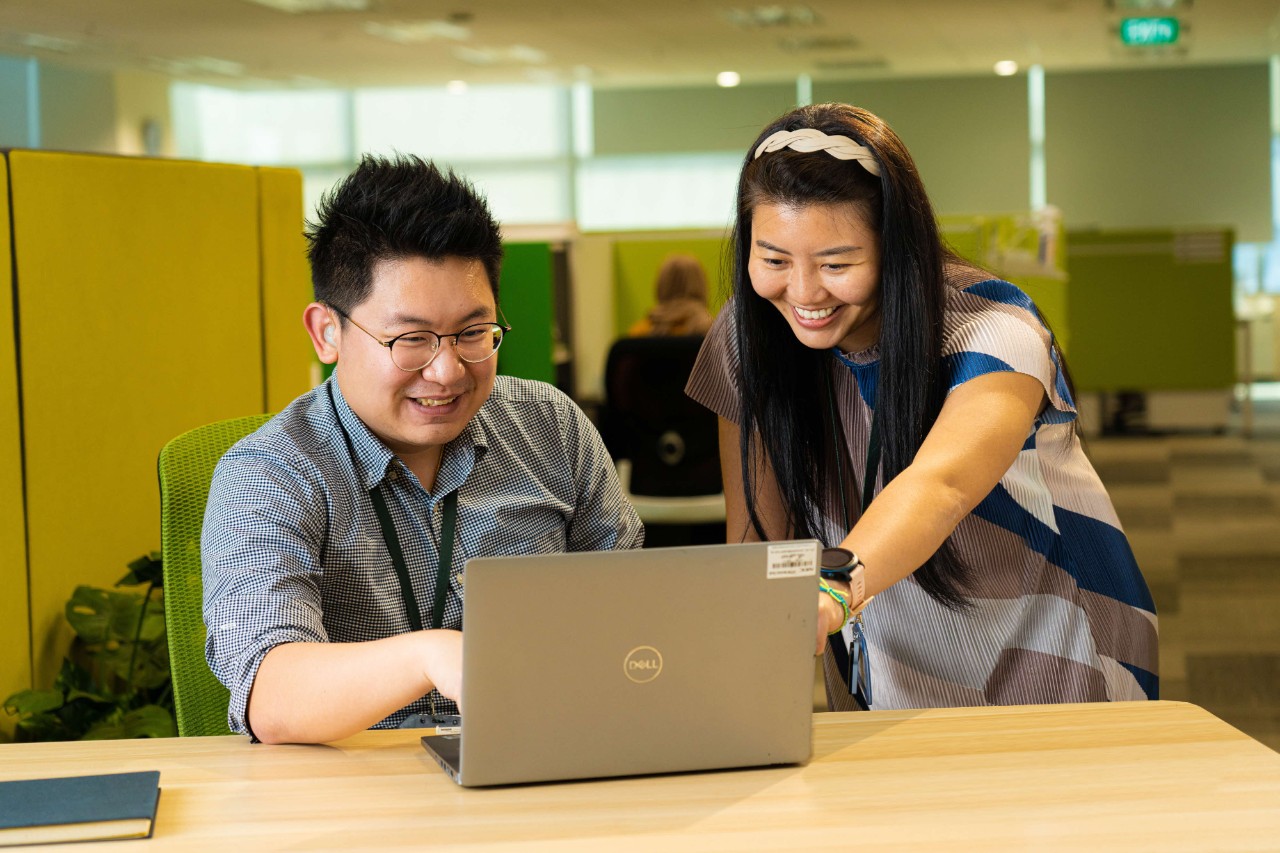 Gui Ying from the IT Governance and Security team, worked closely over the past year with Qi Jian to ensure all CPF data and files are protected. She was full of praise on how approachable and resourceful he was. “Working in the team was challenging, as seniors left the Board not long after I joined. We learnt and worked as a team to explore new solutions and functionalities, and Qi Jian was very willing to help our team whenever we faced any difficulties. Despite having little to no knowledge in cybersecurity, I am grateful for all the guidance and support Qi Jian has offered. I enjoyed working with him.”

Advice for others who face similar challenges

Qi Jian who primarily works at the CPF Tampines Office while having the flexibility to hot desk at the other locations, added that CPFB’s work environment and work-related resources are easily accessible, which makes his experience more comfortable and enjoyable.

When asked if he has any tips for working with someone with a disability, or more specifically someone with hearing loss, he said, “Be patient and understanding towards them. People with hearing conditions rely on lip reading, so they will appreciate if you speak slowly or write your message out on a piece of paper or a phone.”

Qi Jian also encourages everyone to not let challenges overwhelm them, and how it’s important to develop a sense of resilience in all aspects of life so as to become the best version of oneself.

“Keep going and never stop learning, you will grow even more capable and confident at what you are doing. Also, try to meet more people that inspire you, and join like-minded communities. In my case I try to make friends and conversations with other deaf people, and it really inspires and motivates me.”

At CPF Board, we also believe it’s important to build the right conditions and culture for an inclusive workplace, where all CPF staff (including staff with disabilities) are inspired by the many possibilities to improve 4 million members’ lives. In fact, we even earned the Enabling Mark (Silver) Award – a national-level accreditation framework by SG Enable which recognises organisations for their best practices and outcomes in disability-inclusive employment – in 2021!

Want a meaningful job where you can help Singaporeans make the most of their CPF as a foundation to pursue their life purpose? Find out more about the job opportunities we have here.

Information accurate of as of date of publication.

*What is the difference between a person who is “deaf” or “hard of hearing”?

These are the terms that deaf people identify by as these terms show respect and accord dignity to deaf people. Find out more here. 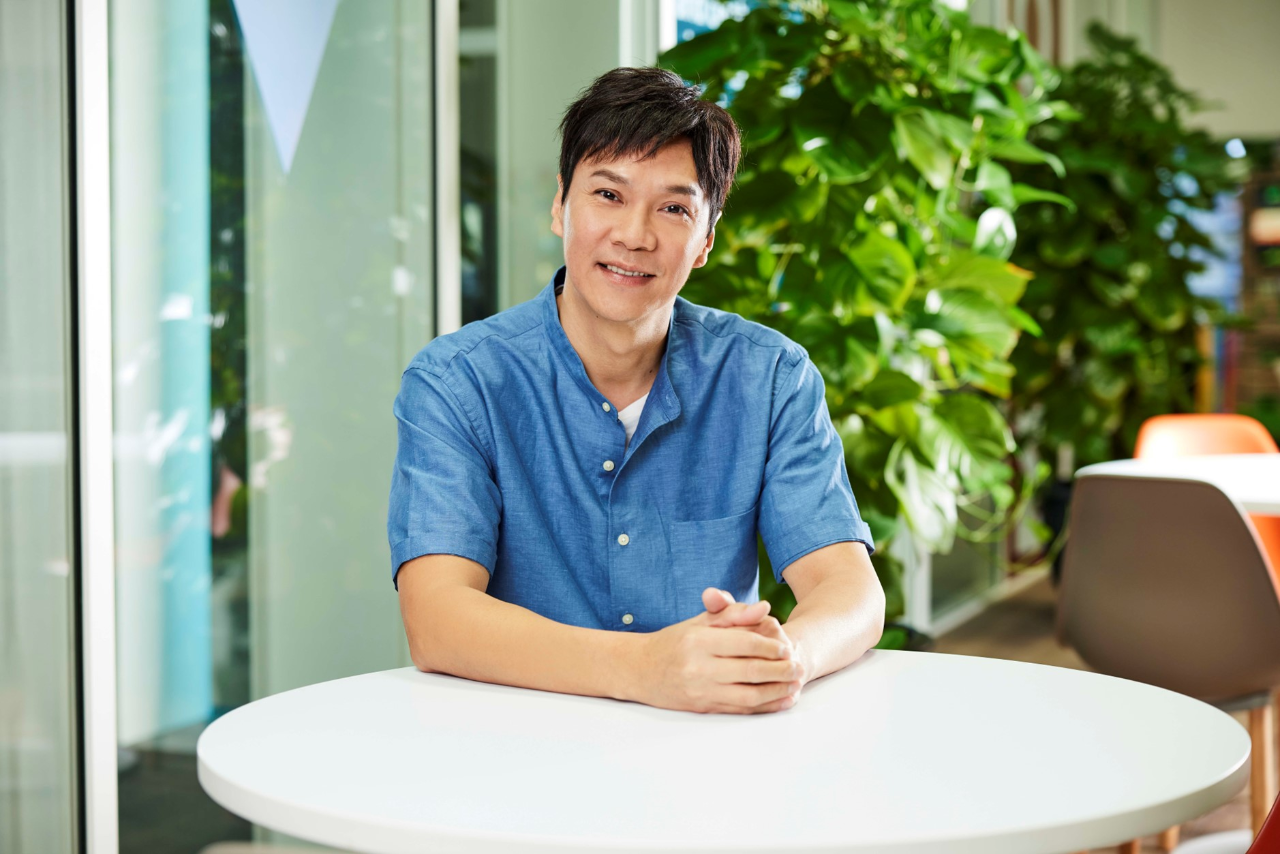 In life and retirement: step by step

What does it mean to approach retirement? We asked Mediacorp artiste Brandon Wong on how to approach this major milestone. 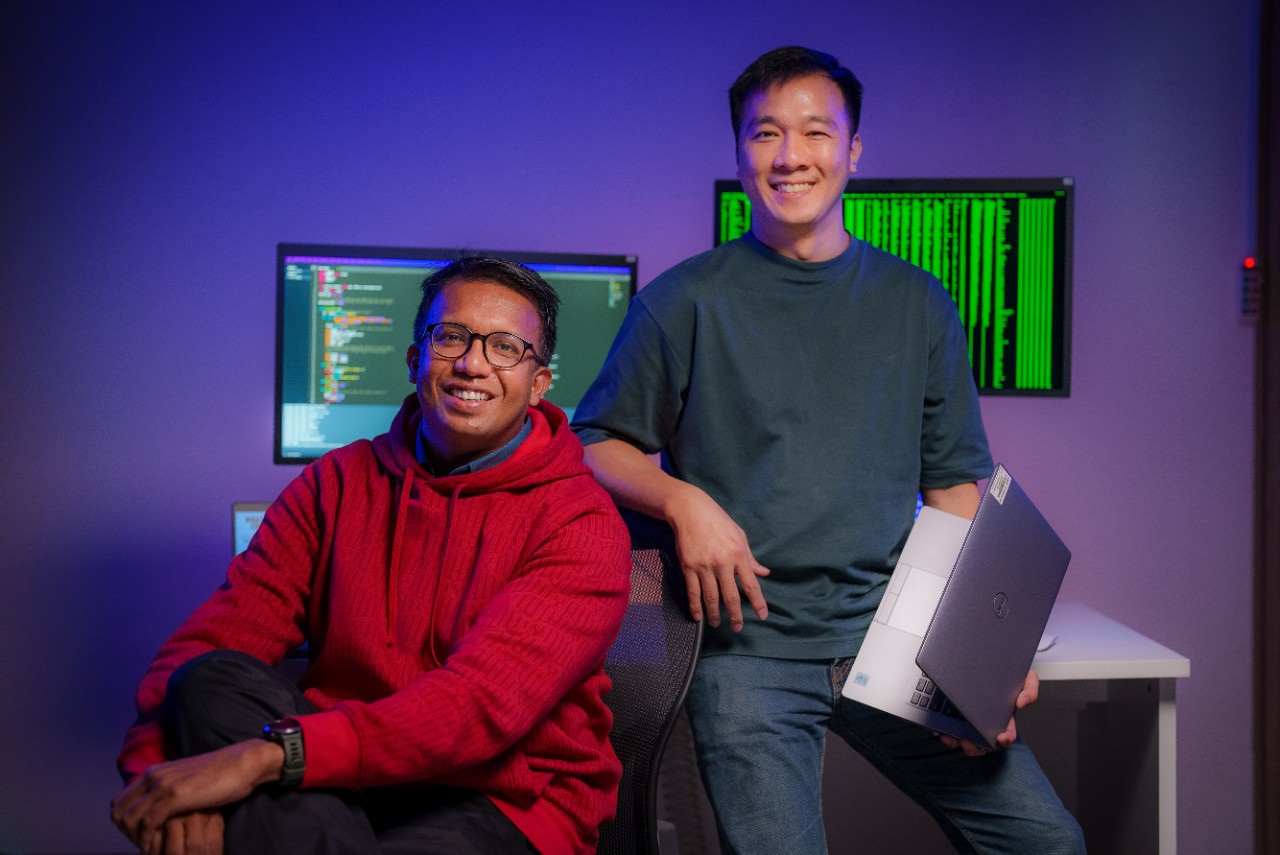 What it is like to work at CPF Board

Here’s how Singapore’s CPF Board invests in its people and technology. 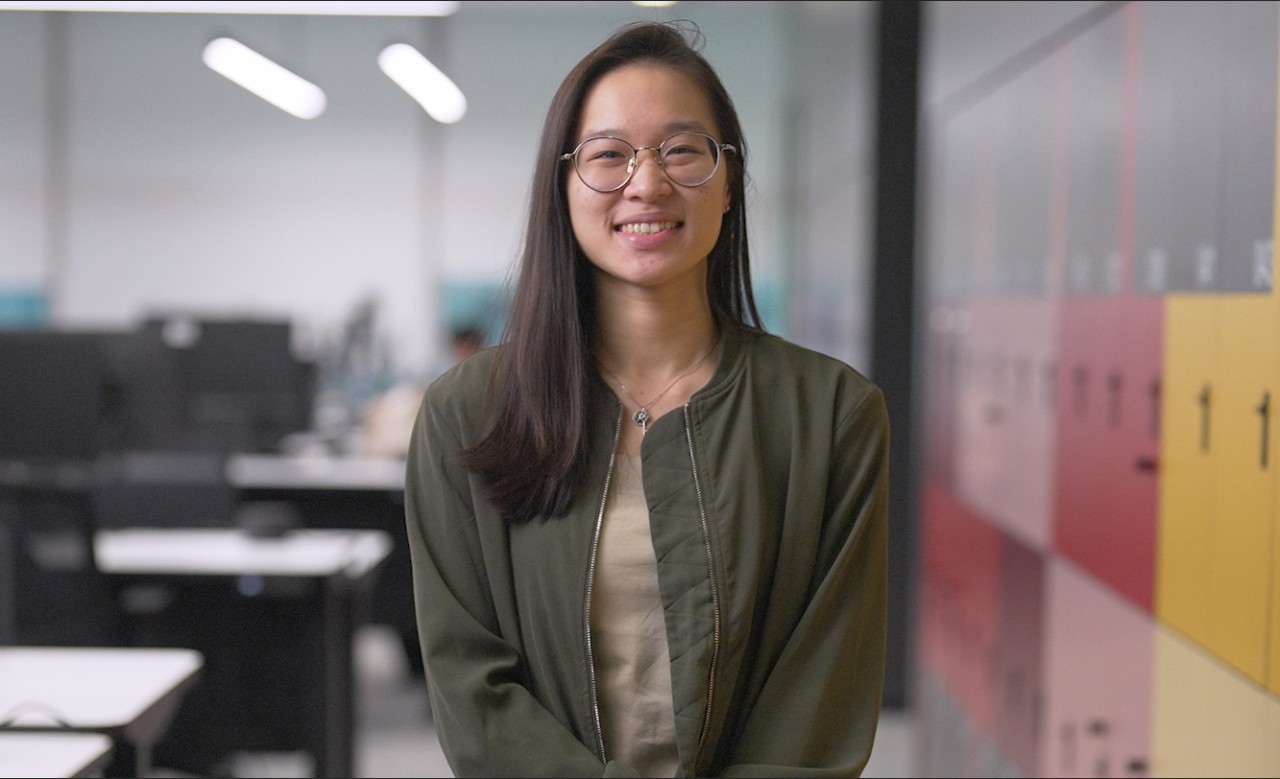 From national gymnast to joining the public service

A 24 year old Singaporean shares how and why she made the change to join CPF Board’s Management Associate Programme.

In life and retirement: step by step

What does it mean to approach retirement? We asked Mediacorp artiste Brandon Wong on how to approach this major milestone.

What it is like to work at CPF Board

Here’s how Singapore’s CPF Board invests in its people and technology.

From national gymnast to joining the public service

A 24 year old Singaporean shares how and why she made the change to join CPF Board’s Management Associate Programme.